Glastonbury is many things to many different people. To the hippies in the Green Field, Glastonbury is a space for spiritual enlightenment. To the kids moshing around in the mud before the Pyramid stage, Glastonbury is a chance to get wasted and listen to bands. To my son, Glastonbury is a tractor-and-lorry convention. To me, Glastonbury is a challenge to my Dadness. The logistics involved in getting in and out of the festival with the minimum of delay, camping with three young children, and coming out of the experience with all limbs and offspring intact requires the kind of fortitude, foresight, judgement and brute physical strength that constitute Dadness.

I have camped at Glastonbury for two consecutive years with my three children and will do so again this year. I have some insights to share with other Dads who might consider attempting the festival with their children:

1) Camp high
As a performer, I camped backstage at the Park, on a high pitch overlooking the festival, close to the fence. The effort involved in hauling the gear uphill was offset by the relative peace and quiet of the spot throughout the festival. If I was going there as a common-or-garden Dad punter, I would aim far away and high.

2) Take a wheelbarrow or trolley
Hauling your gear from car to site is a difficult and unpleasant experience if you’ve got a big family tent and all the extra beds and sleeping bags that come with children. Glastonbury has metal reinforced pathways that are wide and hard enough to take a large trolley or barrow. The walk from car to campsite for me was about half an hour. I had to make two trips. I would struggle to carry my tent more than ten minutes on my back. Keep a tight rein on the amount of gear you are taking. Take some rope to secure your gear to the barrow and some string to tie all the sleeping bags and mats together.

3) Cooking
I never used to cook at festivals but these days finances mean we have to bring all our food with us. So what to take? We live off a big home-cooked chicken pie and sausage rolls, large jars of homemade pesto with bags of pasta, and a bag of croissants. You can’t wash up easily at Glastonbury, and you don’t want to lug a coolbox there, so I avoid meat and food that requires anything more complex than heating a pan of water. Don’t stop off at Tescos on your way there, as then you will have to carry thin shopping bags across the festival.

4) Kids’ field
Bugaboo hell. None of the parents we travelled with enjoyed the kids’ field. First of all, who wants to sit around watching their children do stuff? Secondly, children aren’t going to learn to juggle in the hour or two you spend there. I’d rather see family experiences more integrated with the festival such as… 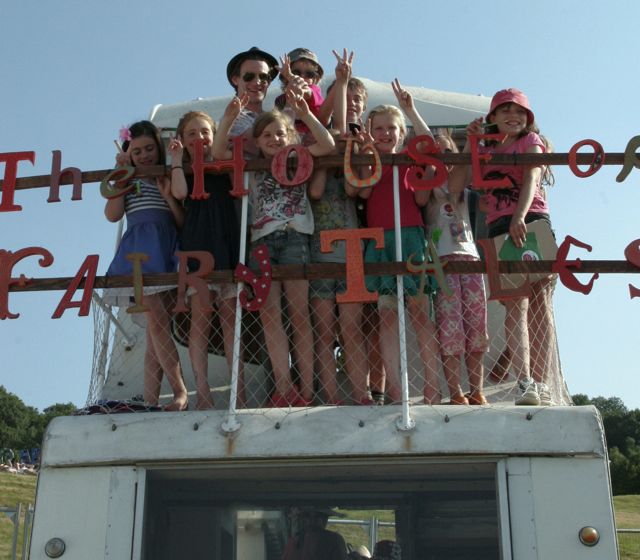 6) The Park
Established by Emily Eavis in 2007, the Park is ideal for Dads. The bar is not so packed, the stage is full of interesting and alternative acts (all the bands I want to see – in Glastonbury 2011, that’s James Blake, Tame Impala, John Grant), and you are well out of the maddening throng. Also the Free University of Glastonbury is in the Park area – I am talking about the history and meaning of camping there on Sunday at 1pm.

7) But what about the headliners?
I didn’t see any of the big acts. I’ve been in those crowds without kids. I couldn’t face them with small children. One of the consequences of taking kids with you is that you are excused Must Seeing the Must See events. I wouldn’t cross the road to watch Bono sing, never mind jostle for position amongst thousands of other people. Free yourself of festival fret – that feeling that something better is happening somewhere else and you must trudge off to see it.

8) You sound like a really dull man
I am speaking only from the Dad perspective here, from that portion within me concerned with the logistics of shifting a family around. But it’s a fair comment.

9) When should Dads arrive at Glastonbury, and when should they leave?
Judging arrival and departure is the real trick. Over the last few years, because of the recession and the poor rate of exchange with the euro, many people take Glastonbury as their holiday. This skews the usual traffic patterns, with lots of people arriving on a Wednesday. I aim to arrive around 11am on Thursday morning. and have never any problems and barely any delay. We leave on Sunday about 4-5pm and likewise there is no queue. To put that in perspective, my mate spent six hours in the car park on Monday. Six hours! Fortunately he did not have his children with him

10) Buggy?
We went for two backpacks in which to haul the children around, each packed up with wet and hot weather gear. Just don’t take a buggy that runs on casters, as I saw a lot of Dads digging the mud and grass out from the wheels. My reasoning is that a buggy will struggle in the really deep Glasto mud. The last two years have been dry. But it won’t always be so.