We have been on a camping tour of South West England, 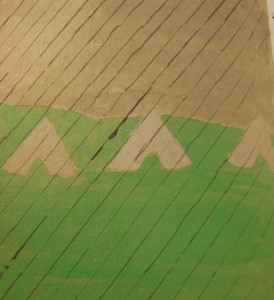 beginning at the Port Eliot festival, moving onto South Penquite Farm atop Bodmin Moor, then up along the coast and over Exmoor, descending steeply at Cloud Farm in Doone Valley.

On Twitter, I received numerous messages requesting my tips for wet camping. I had two, and have since added a third:

1) Hide in the car.
2) Never go to the local museum.
3) Let the children get wet and muddy. And give them more biscuits than they require.

Three small children, seven days and seven nights of rain: not an arrangement that springs to mind upon hearing the word “holiday”. The British people were promised a “barbecue summer”. We got the usual monsoon. The Daily Mail ran photographs of flooded campsites in the Lake District alongside stories of midnight evacuations. Campers muttered darkly to me about government conspiracies: was the weather forecast faked so that we holidayed at home to help the flatlining economy? Was Gordon Brown, in a headdress of turquoise feathers, leading the naked cabinet through the ancient ritual of bringing down the rains to douse the joy of the electorate lest sunlight distract us from our lot of hopeless, ill-rewarded, desperate, pointless, hated toil?

Seven days and seven nights of rain can strip a man of his reason. It’s the sound of the rain against the tent: an unending ovation of sarcastic applause with the occasional catcall of children. Parenthood is a performance. I had a tough audience. In the tent, no-one requested an encore.

Previously I have been cavalier about rainy days camping, based on my now discredited conviction that it rarely rains every hour of the day. I maintained that there is the odd shower, an hour of downpour, and then the clouds move on. In Thomas H Holding’s The Camper’s Handbook from 1908 he shares the delight of a walk he undertook during two wet days: “I put on my waterproof and strolled onto a pulpit of lofty rock. Gazed across Loch Erne; saw the whirlwind gathering a column of water under the steep mountain opposite. This spiral pillar of water towered up, scattered and broke, and gathered again until it came and spent itself at a little point of rock five hundred yards away in the bay.”

I devised the rule about local museums during a late Spring deluge at Tom’s Field in Dorset, when we headed out to Dorchester, mistakenly seeking refuge in the “attractions”. Other families in steaming waterproofs formed a forbidding queue outside the dinosaur museum. I refused to queue in the rain for an experience I would – under normal conditions -have paid good money to avoid so we ended up in a deservedly less popular museum dedicated to the Chinese Terracotta Warriors. Here replicas of the statues created by “museum and conservation technicians in China” were pompously positioned behind velvet ropes and security devices. Dad anger consumed me. Perhaps one day I will go down to the garden centre, buy a bunch of replicas of Michaelangelo’s David and stick them behind a velvet rope and charge the thick end of twenty quid so that families can experience the wonder of the Italian Renaissance.

Rain is a part of camping. Complaining about the rain when you are camping is like complaining about traffic in central London: what else did you expect? And if you take children camping, you must expect them to get wet and perhaps if you let them run around baptising each other in the muddy waters, then they will learn for themselves the importance of protecting their gear from the rain. So much of our troubles stemmed from resisting the children’s natural inclination to run around heedless of the weather. I devised the third rule while lying in my bed, back at home, wondering what could have been done to improve that difficult week when the British people were betrayed by the Met Office.

Soon I will take our wet tent out to a playing field to dry. We struck and pitched camp in the rain frequently on the holiday, working with silent efficiency to slide poles into sleeves and peg out while our little audience in the steaming car brayed and threw food. There is nothing to it. Pitch the outer tent first. Keep your groundsheet dry. At the entrance of the tent, fold back a yard of groundsheet so that – as you enter the tent – you step first on grass, which will absorb the water running off yourself. Take your boots off here and then step onto the groundsheet. There, that is the only practical advice I have to offer for wet days at camp.

For consolation, I offer the thoughts of Jerome K Jerome on the subject from Three Men In A Boat, so that we are reassured that it was ever thus – with one exception: Jerome was spared the false hope peddled by the Met Office.
“It is evening. You are wet through, and there is a good two inches of water in the boat, and all the things are damp. You find a place on the banks that is not quite so puddly as other places you have seen, and you land and lug out the tent, and two of you proceed to fix it.

Instead of helping you, it seems to you that the other man is simply playing the fool

It is soaked and heavy, and it flops about, and tumbles down on you, and clings around your head and makes you mad. The rain is pouring down steadily all the time. It is difficult enough to fix a tent in dry weather: in wet, the task becomes herculean. Instead of helping you, it seems to you that the other man is simply playing the fool. Just as you get your side beautifully fixed, he gives it a hoist from his end, and spoils it all.”

3 comments for “Camping in the rain”