It had been years since I laughed so hard. There were four of us around a campfire set on a hill overlooking Glastonbury festival. It was Saturday night and the vale was a constellation echoing with music, a party that our small children precluded us from attending.

Luke had foraged wooden stakes for fuel; they were laid flat upon the long, dry grass, their tips aflame in the fire pit. As the stakes burned, he got up and adjusted their length. It was not the safest of arrangements; the edges of the pit smouldered as the fire spread along the stake, and visitors tripped over them in the dark. But he seemed to know what he was doing. For the weekend, he was the keeper of the flame.

The conversation turned to meat. Rupert had been to St John’s Market in Liverpool and watched a man auction off bags of assorted meats. Five quid a bag. Ten quid for a bigger bag. No indication of the contents. Just meats, a variety thereof. Cath remembered the tripe and tongue stall at St John’s. Then Luke mentioned the grill steaks advert that made a grand claim of their “pocket of juice”. Other processed burgers lacked this pouch of indeterminate fluid. They were dry. The design flaw of high fat content was made into a point of differentiation and that was why I was laughing, at the thought of all the meetings and money that had gone into marketing the advantage of a “pocket of juice”. 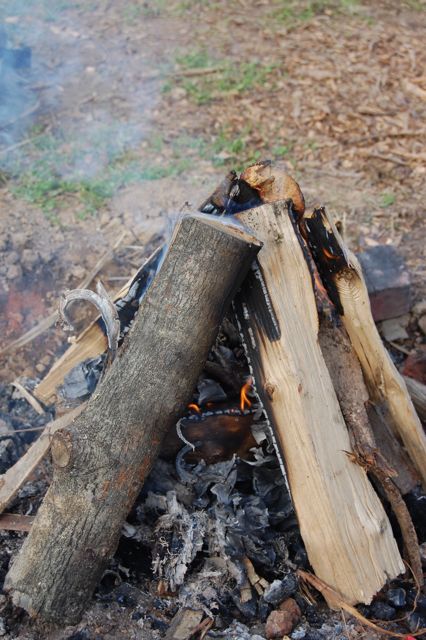 We talked about the impossibility of cooking a frozen chicken kiev, and the experimental fillings foisted upon us by Findus pancakes, then it branched out to the cheese dartboard, with its alternating sections of Cheddar, Edam, Red Leicester, Lancashire, Cheshire cheese and a Baby Bell for a bullseye. Assorted cheeses. Various cheeses.
There was a bottle of brandy, and then the bottle was empty. More people arrived to sit around the campfire and tell tales of their adventures in the festival below. A bottle of Jaegermeister was produced, medicinal and tacky. I spoke of the women’s clothing shop in Lewes were the clothes are made entirely of felt: stiff brightly-coloured felt dresses, felt blouses, felt shoes. Hooded felt capes accessorised with a dream catcher and a large amulet.
“What’s it called?” asked Luke.
“Felt Up,” I replied.
I laughed so much that the next day I had the clear, light sense of well-being that comes after taking a swim or a long walk.
Earlier that afternoon, I had interviewed Peter Hook on stage at the Free University of Glastonbury. Our conversation was mainly about the Hacienda, the club in Manchester that he had invested enormous amounts of money in, and saw nothing in return. His book How Not To Run A Club is a conversational wander through the mistakes that were made at the Hacienda.
“You were losing twenty thousand pounds a week,” I asked him, “why did you carry on with the club?”
“Because I was having a good time,” he replied. The club was somewhere to be with his mates; for all the losses, the pull of having somewhere to go to where he could hang out with friends and have a drink was too strong.
Peter Hook had the Hacienda. I have a campfire.