I discovered Gwalia Farm, a small campsite in Wales, through Tiny Campsites, Dixie Willis’ selection of campsites that are an acre or under in size. The farm is tucked away amongst the lower ranges of the eastern side of Snowdonia, not too far from Machynlleth, a Welsh market town with a progressive stripe. Cath and I grew up in Liverpool, and North Wales is the city’s psychedelic and spiritual retreat. Often, we would hear stories of an auntie or uncle who set the controls for the heart of the sun only to crashland on a welsh croft. The Centre for Alternative Technology, nine miles away from the farm, and its small community of sustainable living, crystallises the spirit of numerous experiments in living that have been conducted over the centuries in the Welsh valleys. 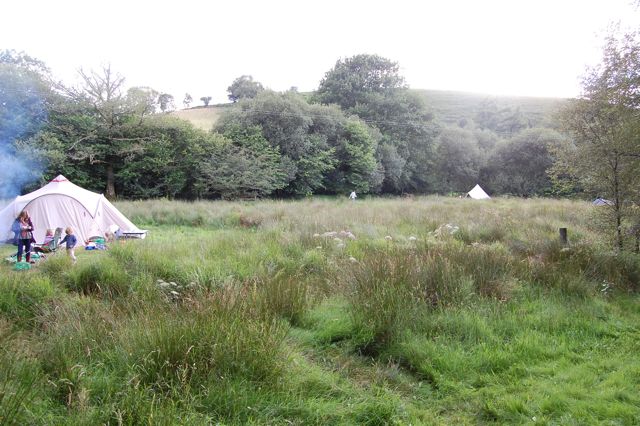 Gwalia Farm is a field around the back of a vegetarian bed and breakfast. Beside a narrow road, there is a rough shoulder where you park up and then trot a dozen yards down to a gate. Beyond the gate there is an overgrown field with half a dozen or so large pitches cut out of the long grass. There is gulley running across the field, a rivulet trickling through it, and after a quick scramble to the woods, there are the latrines – or “lats” as rough campers call them. Holes in the ground. There is a proper WC back at the bed and breakfast. Just past the wood, on the other side of a fence, a pond where some young lads foolishly camped. 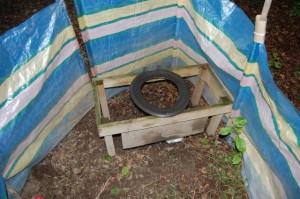 "The lats". My mother would never have stood for this

I watched the gang of young men set their camp. They were no different than we had been all those years ago, compelled to come out into the country for some freedom and fire. Upon arriving, they discovered that the thirty-five-hour-a-week shifts they put in consuming entertainment media had in no way equipped them for camp. Never before had I witnessed an attempt to pitch a tent in a bog. Beside a wild pond surrounded by tall grass, they gallumphed around for fire wood, bringing back the greenest, dampest looking branches; I suspect they tried to light the wood directly with a zippo. A couple of hours later, they came to visit our camp, lured in by the smell of wood smoke and the leg of lamb roasting over the campfire.
“I don’t think we should have camped in a bog,” said one lad, shirtless and tattooed.
“The campfire’s not…” his friend hesitated.
“It’s not working.”
“You will need a campfire to keep away the insects,” Cath observed. “Because you’ll get a lot of midges and mosquitos near that pond.” 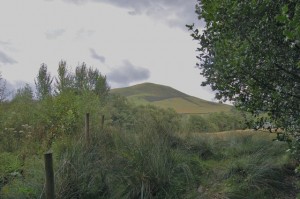 Their disconsolate scratching was eloquent on this matter, even if they were not. Still, I understood how difficult it was to ask for help in setting a campfire, (not that they asked directly for help; the lads presented their wounds like a dog with an injured paw, and hoped that I would infer what was required.) It is embarrassing to admit that you cannot make fire, that the basic technology of humanity eludes you. I gave them a couple of firelighters, some dry wood and a smouldering log. As they loped back to their sinking, midge-ridden camp, I briefly entertained the fantasy of a network of sites like Gwalia Farm spread across the country, rough and ready glades where young people could learn to build Indian shelters, and set campfires, get out of bedrooms and the forecourts of late-night supermarkets to take risks in nature rather than the plastic risks of video games, a fantasy in which camping in Britain is dedicated to the call of the campfire.