Yesterday I met up with the neighbours for drinks. Talk turned to summer plans and I mentioned our intention to spend the whole season camping. 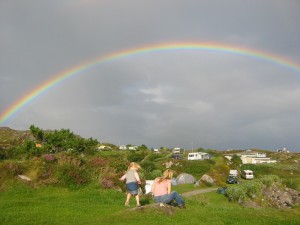 Cath and Alice at Caherdaniel campsite in Ring of Kerry

The recession has introduced a natural break into my working life. I will seize the chance to live more freely, at least until the leaves turn in Autumn. On hearing our plans to camp, the neighbours all chipped in with suggestions for places to go, but then withdrew those suggestions when it became clear that I intended to include them on this website. “But they are secret,” they pleaded. No, I will have no secrets. Slapton Sands in Devon was mentioned, the scene of a terrible disaster in the Second World War, when Exercise Tiger – a rehearsal for D-day – was attacked by German motor torpedo boats. The tragedy was kept secret lest it damage morale.

My neighbour clammed up before revealing precisely which site they had stayed on, but I reckon this one looks a likely candidate. No secrets around here.