The vision of an island, coming out of the fog as you approach it by boat, or surveyed from a beach on the mainland, is alluring. 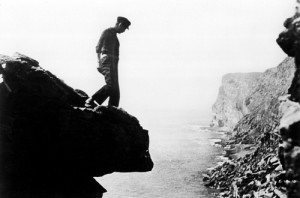 What is the promise of an island? Isolation? Certainly contemporary fears stoke in all our hearts a secret desire to hide away, with a good few miles of water between us and them. An island promises untapped resources. Fantasy Island. Treasure Island. Stand on the cliff and look out at the promise of an island, and you understand some of the urges that drove the ancient peoples to make perilous sea journeys to them.

The myth of a Great Flood appears in many cultures, not just in the story of Noah in the Old Testament. The Aborigines of central Australia say that in the Great Flood, man retreated to the mountain tops. Hawaiian legend tells of a time when the sea entirely overcame the land, aside from one peak on Maunakea, where two people were spared. In the Great Flood, mountain tops become islands. The peak of Ararat where the Ark tottered is the Ur-island, the point from which Man started all over again.

As soon as you land on one island, you are hunting on the horizon for another. There is always another island. This is an ancient rule. When hopping between the islands of the Western Isles and Outer Hebrides, I read of an axe-head discovered in the moorland of Lewis, dating from somewhere between 3500 and 3000BC, the late Neolithic Age. The material it was made of – porcellanite – is found in Northern Ireland, suggesting that there was trade between the Lewis and Ireland. Trade across two hundred miles of Atlantic Ocean, with no map, no lighthouse, no lifejackets! Was the prospect of a barter solely what drove the ancient peoples to make such a trip, or was it the irresistible prospect of landing on another isle.

The island is a grave, opening into the great void of the Atlantic

Admittedly in 3000BC, the climate of the Western Isles was warmer and drier than it is today. This was before the climate change of 1500BC, when higher rainfall waterlogged the soil, turning it into recalcitrant peat. The islands were more bucolic. Treacherous prehistoric journeys from isle to isle make more sense if you reckon in a more hospitable climate, a more fertile soil. Isn’t that a prospect? A fecund virgin isle (for some reason, islands stoke my libido – we’ll consider that question in more depth later, unless you prefer to draw a discrete veil over it now). Once the Western Isles became clad with peat, it was harder for the crofters to scratch a living. As Dr Samuel Johnson remarked in his A Journey To The Western Islands Of Scotland, the islands of the Hebrides have little to recommend them unless one is a “mere lover of naked nature”. (There – you see – his sexual turn of phrase shows that even Dr Johnson felt the stirrings of isle lust somewhere below his enormous gut.)

Perhaps an adolescent viewing of The Wicker Man, set on the fictional Summerisle, where every young lad was obliged to lose their virginity to Britt Ekland, is the crucial influence here

The endpoint of Dr Johnson’s journey was the spiritual island of Iona. Boswell, his traveling companion, was very keen to visit the isle, supposed burial place of the Kings Of Scotland and the point from which St Columba spread Christianity to the wild highlanders. Iona is a mere kerb of land off the coast of Mull, reached today by a small ferry from Fionnphort. It is an island just beyond an island, a hop and a skip from the mainland. This makes traveling to Iona feel even more like an adventure.

When I visited, on 11 September 2001, the beach at Fionnphort was riddled with jellyfish, a dozen flesh Frisbees. Down in the narrow sound, fishing boats meditated at anchor.  The silence was prehistoric. The ferry to Iona is full of Catholic pilgrims to the sacred isle. It pulls up by a line of whitewashed cottages and the island’s fine hotel, The Argyll. The stone of Iona is rich in iron, and at sundown the Argyll looks like it is constructed out of chunks of steak, with the mortar resembling the marbling of fat. Take the rainslick Street Of The Dead through the ruined nunnery and you come to the grounds of the Abbey.  Sitting out as the last of the light lurks above the distant hills of Mull, one feels negligible. A bystander in the eternal war between the sea, the sky and the rock, that red rock, stained with the blood of Oran, a pictish convert buried alive in the foundations of the Abbey by his friend St Columba. When the burial was done, Columba decided he wanted to see the face of his friend one last time. Heaving the earth aside, he found Oran still alive and uttering such blasphemous descriptions of heaven and hell that he was briskly buried once again. There is a lot of flesh in the rock. The Kings of Ireland, Scotland and Norway were buried here. The island is a grave, opening into the great void of the Atlantic. 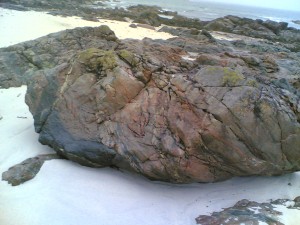 "There is a lot of flesh in the rock"

There is always another island, another stepping stone. At Iona, just as I was smugly downing malts in the bar of Argyll, enjoying that edge-of-the-world frisson, I learnt of the remotest inhabited island in the British Isles; the isle of Foula, separated from the Shetland Isles by fourteen miles of ocean. A place so remote that its people still observe the Julian Calendar, celebrating Old Yule on January 6th with the New Year not beginning until January 13, and so storm-tossed that the ferry has to be winched out of the water in case it is dashed against the harbour. One of its sea cliffs rises to over 1200 feet, topped by a rock platform that hangs over the abyss, a natural diving board. It is this cliff that features at the opening of Michael Powell’s film The Edge Of The World about the evacuation of St Kilda (Powell wanted to film on St Kilda but it proved impossible so Foula stood in for it). Two young virile men race to the top of the peak to decide whether they will abandon the island or not. But one of them, taking a short cut, doesn’t make it and falls to his death.

The loss of a young man is catastrophic to the community, unleashing the forces that will lead them to abandon the isle. At its peak, St Kilda supported two hundred people. By the time of its evacuation on 29 August 1930, the population was down to thirty (after an outbreak of smallpox in 1720, Foula’s population was down to three). In Powell’s film, the modern world in the form of trawlers provide too much of a lure to the young people. Also, they lack the medical resources to care for a young baby. In Powell’s fiction, the islanders leave the place “where life as our fathers knew it is no longer possible”.

St Kilda had been inhabited for 4000 years. Go and find a map. Look how far out it is! One hundred and twelve miles west of the mainland, forty one miles west of the Outer Hebrides. Sea storms would isolate it for nine months of the year. How far out could you go there? Mentally, that is. And socially. Is that the libidinous appeal of the island? Being cut off from normal propriety? Perhaps an adolescent viewing of The Wicker Man, set on the fictional Summerisle, where every young lad was obliged to lose their virginity to Britt Ekland, is the crucial influence here. Yet, with their low populations, on these islands you were obliged to breed. Urgently breed. And young men are wanted, needed, for survival. Teenagers are useless in cities but on islands, they are the ones who can climb down the steep cliffs to fetch the puffin’s eggs for breakfast. 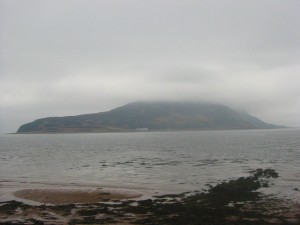 "There is always another island"

In my imagination, Foula is a terrifying place, a mist-shrouded rock with Atlantic winds speeding you over its sheer cliffs. As Samuel Johnson noted, the monks had a habit of building their retreats in the most beautiful of spots, and they never really bothered Foula. That there is one further island than Foula, the abandoned St Kilda, the two bound together by Michael Powell’s film, makes me shiver.

More >> “Holy Island remained coy under a habit of cloud. I sat on the beach, angry with lust for it”