I woke up this morning on the floor of a Hackney flat overlooking London Fields. As I lay there, mind churning to restart, I considered the question of where to pitch a tent. 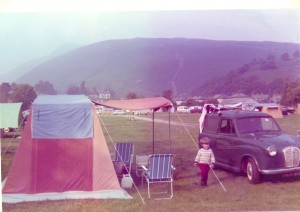 On level ground free of stones or roots, with soil that is not so boggy as to indicate risk of flooding. Neither on top of a hill nor directly at the bottom and certainly not half-way up. Do not pitch directly under large leafy trees, as a steady run-off of rainfall and greenery can damage the outer tent, but stay proximate to any shade they may offer. Take advantage of natural cover from the wind such as hedgerows. So far, so obvious.

The sensible pitcher, having taken account of nature, then considers human needs. Close to water and ablutions but not too close. Plan out in your mind where you are going to cook and whether the smoke will blow into your tent or that of your neighbour’s. Leave a sufficient distance between yourself and other tents to perpetuate the illusion of privacy. When I prepare to pitch, my senses buzz with the awareness of territory already claimed; the temporary ownership rights of others, the fine line between joining a group and infringing upon it.

Back in the Hackney flat, I rose and dressed, and took the liberty of making myself a cup of tea. The previous evening I had broken the cardinal rule of pitching – I had set my bed in the dark. The arrangement of sofa cushions, bust sleeping bag and empty cans of lager did not represent best practise. My host remained in bed. On the balcony I drank a brew and watched the school run. Three children in yellow safety helmets rode bikes of descending size behind their mother. A brother and sister hurried to make the bell but still did not let go of one another’s hands.

There is a Bedouin proverb: we pitch our tents far apart so that our hearts may stay closer together. Far apart so that the sound of their snoring will not disturb. Far apart so that the first thing you see in the morning is not their battered hungover face as it emerges from the tent to verify suspicions about the weather. And, most crucially, far apart so that we are spared the hell of one another domestic routines. No-one should have to listen to me harrying the children into line. No-one should have to listen to Cath and I debate breakfast, the constant exchange of banal information required to keep the family on target. Let us get our shit together before we are expected to be social. Let me at least wash my face.

We are both currently off the treadmill of regular paid employment, as is the fashion this season

I often cite this Bedouin proverb when friends suggest renting a cottage together. Regardless of everyone’s good intentions, such holidays have an undertone of passive aggressive negotiation about differing domestic standards. Families can’t share kitchens. Camping is better – let us come together around the ancient brotherhood of a campfire, rather than around a dining table, with its baggage of bourgeois food performance anxiety and over-familiar topics of conversation.

Nine o’clock came and went. My host remained in bed. We are both currently off the treadmill of regular paid employment, as is the fashion this season. Still, I had an appointment to keep with a job I once had. A job that I meet now and again for coffee: the final negotiations in the break-up of a long-term relationship. I called up the stairs to thank my host for his hospitality but he was asleep. So I packed up the sleeping bag, restored the sofa cushions to their place, and crushed up the empty cans and placed them in the recycling. How you strike camp is as important as how you pitch it. One simple rule applies. Leave No Trace. I opened the windows to air the room and thus I left it just as I had found it.

5 comments for “Where To Pitch A Tent”