The rule that there is always another island first struck me on the isle of Arran, which is further south than the Western Isles, directly west from Glasgow in Argyll. 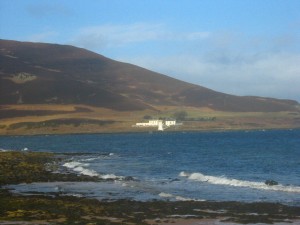 View of the retreat on Holy Island from the mainland

While staying in the southernmost pincer of Lamlash Bay on Arran, I looked out at the enormous hump of Holy Island, (not to be confused with the more famous Holy Island of Lindisfarne) and plotted a trip there. It was a few days before the boat resumed its run to the island. In Lamlash’s Co-Op, the alpaca wool of my hat attracted the interest of a Buddhist monk. He too was keen to get back to Holy Island. His partner had recently died. Together they were responsible for the striking rock paintings that dot the path around the island.

He pointed to my hat and asked me if I had been to Tibet. I hadn’t.
“Tibet is not an island,” I replied.
He looked confused.
“I only go to islands,” I explained. 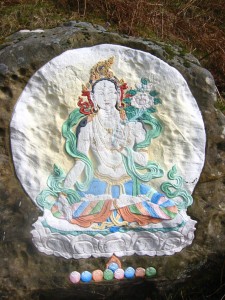 One of numerous striking rock paintings on Holy Island

In order to become a Buddhist monk, one must undertake the long retreat of three years and three months. Certainly this man, I think his name was Christopher, had the spacey air of a man who had spent a lot of time on a remote island. Watching him navigate a supermarket, I coined the simile of “looking as pained as a Buddhist in the Co-op, trying to chose between Flora and I Can’t Believe It’s Not Butter.” The aisles enforced bathos on this remote islander. He was sullied with his earthly concern. Yet he needed it. He needed it for his toast.

For three days, Holy Island remained coy under a habit of cloud. I sat on the beach, angry with lust for it. At moon rise, its silhouette was that of a narrow waist and voluptuous hips. The wing beats of gulls ricocheted across the bay and at dusk, the seals lolled in the shallows, turned their tails up and watched me sulk. The world turned within me, moved onto the next tooth of the cog. Finally, the skirt of cloud was hitched up, inviting us in, and we were able to take the boat across the bay.

The Holy Island project began in 1992 when the island was purchased by the Rokpa Trust. The peace centre on the North of the island is open to people of all faiths, but you must follow the five golden rules; while on the island, you are requested not to kill, steal, lie, intoxicate or fornicate, at least until you are back on Arran. The peace centre is on the retreat circuit, a path followed by people whose sense of well-being requires that the world be kept at arm’s length. On arrival at Holy Island, I had barely traversed the mandala garden before I overheard two self-examiners discussing the inevitable politics of communes as they had arisen in the various retreats they had embarked upon. Nothing I heard made me change my opinion that all communes are doomed to acrimony over lentil allocation.

The condition of contemporary life – its incessant chatter, its deprived public space – turns our faces once again out to sea, in search of peace

Just to walk around the island was retreat enough for me. A path takes you from North to South, where there is an International Women’s Buddhist retreat, then turns over the low hump of the peak and back down the other side. Along the walk, there is a grove of young trees planted for the lost children of Dunblane, a hermit’s cave, and Christopher’s striking, colourful rock paintings of Buddhist icons.

Retreat is a possibility modern man worries about on a daily basis, the way you tongue a cavity and consider the dentist. No one wants to be suburban. You want to live extremes. Either be the junction box through which all the currents of the metropolis flow, or live in a dark cave on an island a few miles out from another island. The condition of contemporary life – its incessant chatter, its deprived public space – turns our faces once again out to sea, in search of peace.

Against such romantic idealisations, there are the realities of island life. As Samuel Johnson wrote of Talisker on the isle of Skye; “Talisker is the place beyond all that I have seen, from which the gay and the jovial seem utterly excluded; and where the hermit might expect to grow old in meditation, without possibility of disturbance or interruption.”

In For The Islands I Sing, a fragmentary autobiography by the Orkney writer George Mackay Brown, he considers the sea valley of Rackwick on the isle of Hoy – “a green bowl gently tilted between the hills and the ocean”. “We must always be on our guard not to romanticise: life in a place like Rackwick must always have been stark and dangerous and uncomfortable.”

Islands have been used as prisons. Consider Alcatraz or its forebear, the prison isle of Chateau D’If off the coast of Marseilles. It was on the Chateau D’If that Dumas imprisoned The Count Of Monte Cristo (even in Dumas’ lifetime, sightseers journeyed to the isle to see the cell in which the Count was held, and so one was constructed, along with a hole from which the character supposedly escaped). The prison is a forbidding construction. The boat drops you at the base of a rock staircase zig-zagging up the side of the stark fortress. The sun hammers away at the anvil of your skull. You get off the boat and immediately want to get back on again.

Still, we are people of extremes. Could we not cope with the privations of island life, especially as we would now have a few tricks of modern technology up our sleeve? Let Mackay Brown spell out our case for becoming an islander:

“Yet I believe that their closeness to the elements, their pursuit of whale and herring and their anxious tending of the corn all summer, the winter flame on the hearth that their own hands had dug from the moor, while – if the harvest of sea and land had yielded an adequate bounty – the cupboard was well stocked till spring; that kind of life is more meaningful by far than the lives of people who set out each morning for an office by train with The Times to read; a holiday in Spain with wine and sun the only oasis in their desert.”