Math recently acquired a portable barbeque, the Weber Charcoal Go-Anywhere Grill. It has a pleasingly vintage shape, and is solidly constructed. We spent an afternoon at Homebase checking out the other portable barbecues, all of which felt rather neurotic and liable to fall apart in a complete collapse of nerve. The Weber has a vented lid which traps a convective circulating heat, much better for cooking larger boned joints. 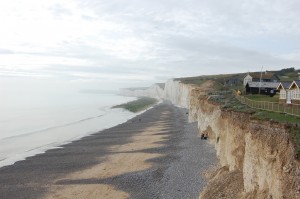 We took the Weber out for a test run to Birling Gap, a pebbled beach tucked in amongst the Seven Sisters chalk cliffs. A steep tower of stairs leads down from the eroding cliff edge to the beach itself. It was late afternoon and the surf was lively. High tide was at six o’clock.

Math began cooking. The grill does not have separate settings, you cannot raise or lower it in relation to the heat. Once his pyramid of coals were lit, he arranged the heat into thirds, with two hot patches either side of an empty middle section. Having a section of the grill that is not over any coals works on a lidded barbecue because the circulating heat will be sufficient for slow cooking.

“Don’t make the mistake of presuming that we know what we are doing,” he warned

Some chefs prefer arranging the coals in a gradually declined slope from left to right, but the portable barbecues lack the depth necessary for this arrangement. The trick is to create the variety of temperatures required to cook a variety of meats – in this case, boned chicken thighs, venison kebabs and sausages, all with a light coating of oil so that they would not stick to the grill.

The tide battled its way up the beach, making for an anxious moment in which we wondered if we would have to strike camp and break for the stairs. Another family arrived with their barbecue, took a doubtful look at the churning rising waters, but were reassured by the sight of us blithely cooking. Math went over to speak to them;

“Don’t make the mistake of presuming that we know what we are doing,” he warned. They set up as far the encroaching waves as was possible on the narrow strip of beach, and started cooking. Fortune favours the brave.

Here are my barbecue recipes