“Jerkin and Hood. Tents in a half circle. Pitched at sundown, gone in the morning. Outlaws…?”

The hooded figures marched up the Long Man of Wilmington. The men wore knee-length braided shorts, brown leather belts, jerkins and pointed green cowls in imitation of the forest outlaws of Robin and his Merry Men. The women wore Arabian keffiyeh-styled headdresses to protect against the sun and one-piece knee-length dresses tied with leather-belts. On the flap of their gray Bergan rucksacks, a mark was painted – a large letter K beside the curling smoke of a campfire and a single green fir tree. The men and women greeted one another with the Native American salute of the open palm, right hand raised high. All the hikers bore rough ash hiking staves, which pushed against the earth as they ascended the Long Man, singing a song of their own devising: “The Kindred is Coming.” 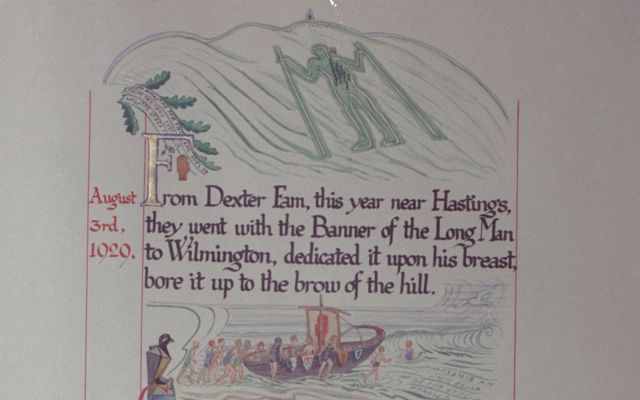 Carved into the north-facing scarp slope of Windover Hill, the Long Man stands two hundred feet tall. In each hand he clutches what appear to be two staves. The provenance of the Long Man of Wilmington is uncertain: we cannot be sure if it is a sixteenth century tribute or symbol of pagan antiquity. Today, the outline is defined with concrete, and the Long Man is visible to the traffic passing on the A27. But in the year of the hike, August 1929, the figure outlined in the long grass was a mystical watermark on the hillside. 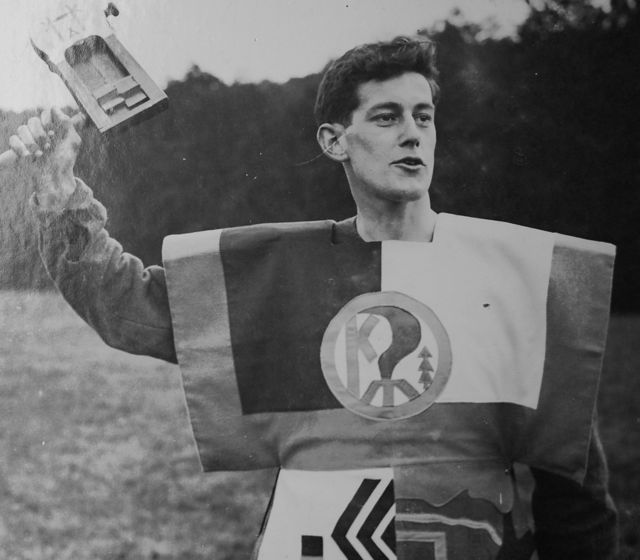 Hawk, gleemaster of the Kindred of the Kibbo Kift

Windover Hill and the surrounding area are rich with remnants from England’s ancient past: Neolithic flint mines, Bronze age burial barrows and a Roman terrace way. The hikers marched up the steep hill in their variant of the classical wedge formation and, at the heart of the Long Man, performed a brief ritual of dedication. Their voices echoed around the distinctive acoustics of the concave slope. Thus they reached back, far, far back into the void-faced hood of prehistory. Mankind’s evolution has been a progressive degeneration, with alienation at every stage. First Man was alienated from oneness with his god, then cast out from the harmony of Nature. The process of separation is remorseless, each severance placing another partition between Man and the Golden Age. He lost his link to his ancestors. He grew apart from others, from his community and fellow man, until even his wife and his own children were alien to him. Each cut was made by the instruments of knowledge and industry, two scissor blades cutting in unison. The final divorce, the ultimate decree nisi, was issued by Freud: man was alienated from his own self. The hikers reached through the void and into the hood searching for the rough hand of Neolithic man, their ancient guide to living in harmony with the subtle, undulating forms of the Downs.

Ritual completed, the hikers continued up over the featureless head of the Long Man to the brow of the hill. There, they looked down over the South Downs, a cumuliform landscape of “whale-backed” hills and verdant valleys founded on a bank of chalk. Cloud shadows passed over ploughed wheatfields. In the distance, coastal bays and the glittering English Channel. On the coast the seven peaks of the chalk cliffs rise and fall. Known as the Seven Sisters, each Sister is the measure of a terrifying eternity: trillions of coccolithophores – nanoplankton – lived and died here in a deep warm sea, leaving behind their scales of calcium carbonate to build up over time into the gleaming white cliffs. On the beach, a stunning everywhere of light as the high sun was reflected by these geological mausoleums.

From a leaflet distributed by the Kindred of the Kibbo Kift

The Sussex downs, their name derived from the Saxon word ‘dun’, meaning hill, were one of many sites in the English landscape stalked by these strange hikers. Their rituals summoned the ancient British pagan tradition, from back before the Romans, back to a Neolithic Albion of menhir, tor and cromlech, Silbury Hill and the White Horse of Ulmington. The ancient sites throbbed with dormant meaning. For a joke – in the Freudian sense that there is no such thing as a joke – one of their men stripped naked and squatted at the root of the enormous phallus of the Cerne Giant, as if drawing the sexual potency into himself. Such ancestor worship sounds preposterous now: in the twenty-first century, Stonehenge is a tourist attraction at which the passing traffic on the A303 slows to gawp, before speeding on to holidays in Dorset. But in 1929, the remains of English prehistory retained sufficient mystical charge to inspire this select group of hikers and campers as they sought to change the direction of Western civilisation. They were the most intriguing and inspiring of English reform movements, an elite cell a few hundred strong, already nine years into their existence come the occasion of the dedication to the Long Man of Wilmington: they were the Kindred of the Kibbo Kift.

This is the opening of a long essay on the Kindred of the Kibbo Kift to be published by The Idler in 2010.

6 comments for “Kindred of the Kibbo Kift”