The people at the back of the bus stared at us with mild scrutiny. Some of their faces showed a less inhibited setting, somewhere between Appalled Fascination and Frankly Aghast.

What on earth were a couple in their early thirties doing on the 242 bus that runs between Hackney and the City carrying enormous ruck sacks and a tent on a trolley?

Wait. No! They’ve got a child with them as well. I bowed my head with shame at the situation into which I had placed my family. 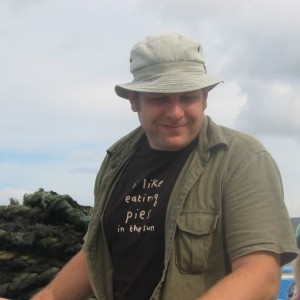 Cathy’s rucksack was also outsized, hung off her five-foot tall, blonde, petite frame. My mother describes my wife as a trooper, and this trip resembled a kind of troop training exercise for a young mother. Cath’s rucksack contained two weeks worth of clothes – hers and our daughter’s – packed into water-proof sacks, a sleeping bag, three sections of plastic origami that unfolded into seats, a bag of tea candles and flame-retardant paper lanterns, various soft toys and various thin and flat works of children’s literature, a tupperware box of ground spices, shoes and more shoes and wellies, toilet rolls, bin bags, warm jumpers, waterproofs and sunglasses. Ready for anything. The tent was lashed to a small trolley, mere hand luggage. Balanced on top of the baby buggy, a blue cool bag containing frozen litres of milk, baby bottles, fruit, snacks, sausages.

The bus juddered to a halt and as one over-laden four-legged beast we stumbled back and forth.

More >> “This Dunkirk of a holiday”