My rucksack contained three beds, two sleeping bags, a small ration of underwear, a shirt, a pair of shorts, Birkenstocks sandals, a stove, methlylated spirits, some of the shoe overflow from Cath’s rucksack, an Opinel knife, two torches, a rubber mallet, a notebook, a bottle of Talisker single malt, a pair of speakers, an iPod, a sheepskin rug, a baby doll, and its sleeping bag, and indeed all of its baby camping equipment, none of which looked particularly practical to my eye. 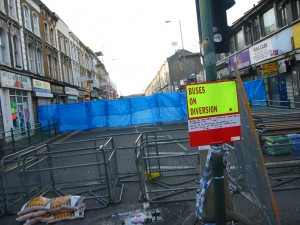 Margaret Thatcher is often attributed as saying, “If a man finds himself a passenger on a bus having attained the age of twenty-six, he can account himself a failure in life.” So how should I account of myself as a man past the age of thirty, who has turned his beautiful young wife into a pack horse and commandeered his toddler’s buggy into this Dunkirk of a holiday?

The other passengers on the bus did the accounting for me. The Hackney buses are renowned for the eccentricities of their passengers. For many weeks, the bus carried a sign reading “Please do not transport your fish on this bus,” in honour of the Vietnamese man who used it to transport polystyrene crates of tilapia between Billingsgate and the Dalston restaurants: he disturbed the implaccable sang froid of London commuters by splashing icy fishwater over their trouser suits at 8am. So when Cath whispered to me, as we jostled around one another like tortoises on their hind legs, “Oh my god. We’re the fish man,” I knew exactly what she meant. And the shame of being the fish man was keen. So keen that I could take it no longer, and decided to tromp up to the second deck.

Downstairs, the passengers were mainly older black British citizens. Cath fielded concerned inquiries from a kindly member of the Windrush generation. What were we doing? Going camping. That was insufficient explanation. Cath knew from her conversations with colleagues at Waltham Forest council that, in the words of Ralph, the leisure officer, “Black British people don’t do camping.” Ralph, of Caribbean descent himself, took his children camping every year for two weeks in the classic ‘A’ frame tent – but he had never managed to persuade any of his friends or family to join him. When the office talk turned to holidays, Cath would mention our plans to camp around Ireland or Cornwall and her enthusiasm would meet a dead bat.

Cath did her best to explain to the doubting passengers the method in our seeming madness. Cath is always quick to shoot me down if I make it sound as if these camping trips were all my idea, as if this was some mad man project to which the family was in thrall. No, she was as much the architect of this activity as I.

Camping and parenting are two activities that, from the outside, appear to be a perverse and wilful abandonment of ease.

There are very good reasons for going camping. Even if you’ve got small children? Especially if you’ve got small children. The decision to have children, to embark upon such a messy and demanding adventure as parenthood, is analogous to the decision to go camping, heedless of the weather forecast, with limited resources to hand, a hazy idea of the destination, and most importantly with no certainty of what the future will bring.  Camping is unpredictable, and that is why it is superior to two weeks in a Spanish resort, or a month in a Tuscan villa, or any other home-from-home respite from work.

The same desire for unpredictability lay behind my advocacy of having children. As ridiculous as it seems in retrospect, I grew bored of the twentysomething life of parties and drunken angsty conversations and dithering around with committment, and saw parenting as an adventure with an uncertain outcome.

Camping is one of the defining decisions Cath and I have taken as parents, even if we have no idea how that decision will turn out, at least it has been made and life moves on.

These are different arguments than the ones Cath would have essayed on the bus that rainy Friday morning.

Cath let the facts speak for themselves.

“But what about the child?” asked the passenger.

“You must get very cold.”

Now that was a good question. The fact is that Hackney has the lowest ratio of car owners per head in the UK. For the decade we had lived in Hackney, a car was unnecessary. Where would you park it? How could you leave anything of any value out on these streets? Tesco was five minutes from our house. My Dad tried to drive there once, through Saturday’s traffic, a tiresome stalled argument of cars that stretched from Dalston Junction to Mare Street; it took him an hour, and he was a wreck by the end of it.  Cath and I were defined by our walking, our bus-bothering and our dashes to the station. The money I could have blown on car insurance and petrol went on taxis and train tickets. All very reasonable until you start camping.

I look back on my years of carless camping with admiration. The difficulty of travelling to remote rural Britain using only public transport contributed to the vital sense of defamiliarisation that a good camping trip requires; a campsite should not be a home-from-home, rather it should be a place where you shake off the mental habits of domesticity and renew your connection to the ever-unfolding reality of your existence. In 2009, we went camping with a car for the first time, as we now have three children, and even King Kong’s Valet cannot carry all their gear on his back. An intensity was missing from our trips, the urgency of the timetable, the adrenalin of chasing a bus while you are wearing a backpack.

But it was nice to have chairs, for once.