Tom and Florence sit side by side in deck chairs: he is wearing a cap and glasses and she has her hands resting on her lap, holding a handbag. Arrayed before them, their three daughters on sun loungers, Brenda, Sheila and Sylvia. Then the two son in laws Billy and my father Eddie are in shot (I presume the missing son in law took the photograph), sat apart and at the edges, with an intermingling of grandchildren in the foreground (but not me, I am unborn). 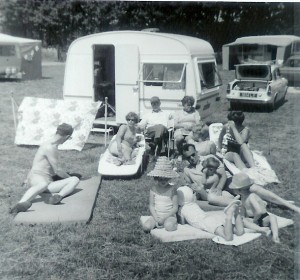 Tom and Florence Bateman with family

This picture captures the outpouring of family that has issued from my grandparents, and it shows how the extended family came together on these holidays – with the matriach and patriach in their tin bubble of a caravan surrounded by the next generation in their A-frame tents. My earliest memories involve such pan-generational camping trip. My father drove non-stop from Liverpool to Brittany and we arrived at near midnight, far too late to camp. As the youngest of the entire family, I was given the privilige of sleeping in Tom and Florence’s caravan while my parents and siblings kipped in their awning. But I am upset. Tom can’t understand why. I am asking for a cherry. Cherry! He won’t go to sleep without a cherry. No, Jerry. He wants Jerry. His bear. Eventually Jerry was tracked down. My father, already asleep, was using him as a pillow. My teddy.