I was woken by the intricate melodies of the song thrush marking its territory. The dawn chorus was astonishingly loud through the thin walls of a tent. Nature called. I unzipped the door and clambered out onto the long dewy meadow grass. 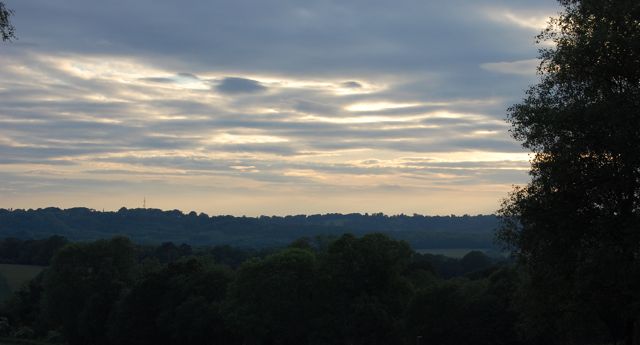 The cold waters of night lay over the land. First light pulsed in the East. In the West, the crescent moon and its court of stars were still up. North into the valley, first light drew the pitch out of the black; the lower fields lurked through thick grainy bands of blue. In the towns and cities the day is either on or off; you miss the long in-between of dawn and dusk, the magically prolonged moment in which the sun rises to challenge the nocturnal supremacy of the moon.

I feel most alive when I am camping. My first response, on finding myself jobless in late Spring, was that my family should spend the summer camping

The moon is taken seriously at Plaw Hatch Farm, a small two hundred acre biodynamic farm near Ashdown Forest in East Sussex. Biodynamic agriculture was devised by Rudolf Steiner, the founder of Anthroposophy and a respectable figure in the progressive underground that flourished in the late nineteenth century and the first decades of the twentieth century. Steiner’s thought is broadly categorised as spiritual science; he sought to unify science’s exacting practicality with mankind’s mystical yearnings. Biodynamic farming belongs to the later practical phase of Steiner’s philosophy, bringing together sound practices we now recognise as mainstream due to the organic food movement, with a touch of the occult: preparations made from cow horn and crystals infuse the soil with cosmic forces, while the respective rhythms of the earth, the moon and the cosmos influence the planting calendar.

The biodynamic farm aspires to a closed system: the animals are born and reared on the farm, and their manure fertilises the grass that feeds the animals which in turn produces more manure. At Plaw Hatch Farm, the cycle encompasses lambs, sheep and pigs, chickens and ducks, a rabbit field, cows, a milking shed and polytunnels of vegetables. And two beehives. New inputs into the system – such as campers – are taken in reluctantly.

I feel most alive when I am camping. My first response, on finding myself jobless in late Spring, was that my family should spend the summer camping. After two rainy summers of commuting and childcare, the long-term weather forecast predicted a barbecue British summer. More prosaically, the pound was weak against the euro and the British public were pulling their horns in as the economy collapsed. So economically and meteorologically, the summer of camping seemed the fit response to unemployment. More than that, I have long felt that camping could hold the key to a new way of life, and there was certainly an appetite for a new way of life in the economic wreckage. The summer was my chance to explore the meaning and history of camping and how it related to a new view of society, our approach to parenting, even my manhood. The long boom was the era of Big Tent politics, in which our leaders drew together disparate factions under the promise of endless economic growth, a promise that seemed free of ideology. That era was over, and it was time to discover what Little Tent politics might bring. Instead of house prices, I would think only of tents and where to pitch them. As an article in the LA Times on music festivals noted, there was a “growing prominence of temporary structures in a world suddenly drained of capital.” Camping seemed a fit response to the failed property cult.

Alfred's perspective on the wood pile

As dawn rose, the children stirred. The summer of camping would change their lives also; for the better, I hoped. There was a great deal for them to learn at Plaw Hatch Farm. About bees, for example. My son was only two years old and had never seen a bee dutifully fly between the long spears of purple-hued grass. We laid down together to watch the worker’s toil. Every time the bee buzz-hopped over the meadow grass to light upon a wild flower, Alfred laughed at the unexpected comedy of nature.

Bees are eunuchs in Nature’s harem

The bee belonged to the farm’s two hives. Bees are integral to biodynamic farming. Rudolf Steiner was so enamoured of the bee that he gave eight lectures concerning their vital role in pollinating crops. Like Albert Einstein, he saw no future for mankind if the bee ever resigned its position. The lectures were addressed to workers at the Goetheanum in Dornach, Switzerland, and in his prelude – delivered in February 1923 – he explores the nature of the bee in much the same way as an author would explain the inner lives of her characters. Bees, he observed, experience intense sexual repression. The queen is responsible for propagating the species so the unused sexual energy of the other bees is diverted into the activity of the hive: “Since this love life is held back in all the bees except a single queen, the sexual life of the beehive is transformed into all this activity that the bees develop among themselves,” he wrote.

Gazing back down the valley toward Plaw Hatch Farm

Steiner continues by highlighting the irony – although he does not refer to it as such – that the bees draw sustenance from the sexual organs of flowers: “the very parts of a plant that are pervaded by the plant’s love life.” The image is quite touching; bees are eunuchs in Nature’s harem. Or dutiful office workers in Nature’s office; fat and furry bachelors tormented by their more glamourous and sensual colleagues, the flowers. “Bee! Bee!” said Alfred, as excited by his newly-learnt ability to name things as the thing itself.

Making this detour by way of the beehive, the entire cosmos can find its way into human beings

The product of this sexually repression is honey, as sensual a substance as exists in Nature, a substance somewhere between a solid and a liquid. A magical paradox: the sweet vomit of insects that is as pure and golden as a soul. I drizzle honey into Alfred’s porridge every morning, now that I am at home and not at work. Steiner hymns honey thusly: “Making this detour by way of the beehive, the entire cosmos can find its way into human beings and help to make them sound in mind and body”. Thus in the observation of the bee and your imbibing of its honey, “you will arrive at the point of expanding wisdom about the nature of humans to include true knowledge of the cosmos.”
In his introduction to Steiner’s lectures on bees, Gunther Hauk tells us: “Steiner gave these lectures to the workers at the Goetheanum in Dornach, Switzerland. Among the workers was a professional bee-keeper, Mr Muller, who contributed to these lectures in the form of insights and questions. Mr Muller rebelled vehemently and showed no understanding, however, when Steiner explained the intricacies of the queen bee, mentioning that the modern method of breeding queens (using the larvae of worker bees, a practise that had already been in use for about fifteen years) would have long-term detrimental effects – so grave that ‘a century later all breeding of bees would cease if only artificially produced bees were used.’”
Writing in 1998, Hauk confirms Steiner’s suspicion as to the potentially detrimental effects of man’s interference in the natural processes of the beehive: “Now that over 60 percent of the American honeybee populations have died during the past ten years, we should certainly become more alert and open to such statements.”
Alfred may be part of the last generation to witness the bees at work.

1 comment for “The Sexually Repressed Bees
of Plaw Hatch Farm”